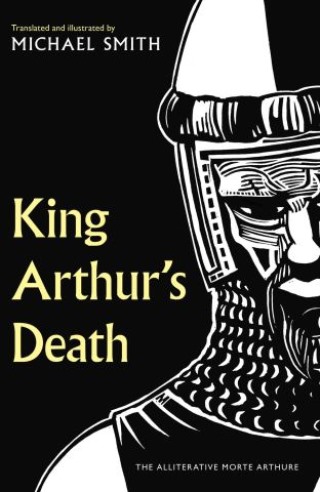 King Arthur’s Death (commonly referred to as the Alliterative Morte Arthure) is a Middle English poem that was written in Lincolnshire at the end of the fourteenth century. A source work for Malory’s later Morte d’Arthur, it is an epic tale which documents the horrors of war, the loneliness of kingship and the terrible price paid for arrogance.

This magnificent poem tells of the arrival of emissaries from Imperial Rome demanding that Arthur pays his dues as a subject. It is Arthur’s refusal to accept these demands, and the premise of foreign domination, which leads him on a quest to confront his foes and challenge them for command of his lands.

Yet his venture is not without cost. His decision to leave Mordred at home to watch over his realm and guard Guinevere, his queen, proves to be a costly one. Though Arthur defeats the Romans, events in Britain draw him back where he must now face Mordred for control of his kingdom – a conflict ultimately fatal to the pair of them.

Combining heroic action, probing insight into human frailty and a great attention to contemporary detail, King Arthur’s Death is not only a lesson in effective kingship, it is also an astonishing mirror on our own times, highlighting the folly of letting stubborn dogma drive political decisions.

Michael Smith: Michael Smith is from Cheshire. He studied history at the University of York and printmaking at the Curwen Print Study Centre near Cambridge. His first book, a translation of Sir Gawain and the Green Knight, was published by Unbound in 2018. www.mythicalbritain.co.uk/@mythicalbritain